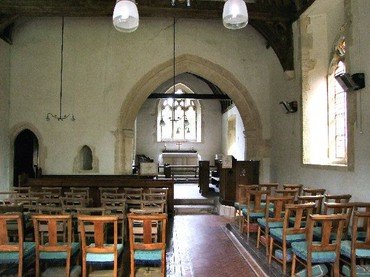 One of the most isolated churches in Kent and only accessible when it is opened for summer services, this is a church of great character. Norman in origin with a 13th century north aisle which was later knocked through to a single roofed cell (cf Sandwich St Mary) it has a 19th century air but through which one can still pull out the past. The chancel is raised up many steps introduced by Joseph Clarke when he heavily restored this church in 1880. Before that there was still a beaten earth floor! The 13th century piscina is now part of the s window – showing how the floor has risen and the window lowered! A lovely hagioscope leads from the former north aisle to the chancel. The latter contains fine Victorian tiles and, unusually for such a rural and poor area, a mosaic floored chancel, a feature normally reserved for wealthy urban churches. The treasure, though, is the 12th century lead font (see also Lower Halstow, Brookland and Eythorne). Rescued from hiding in a blocked up vault in 1880, it was restored by the addition of wooding framing which adds nothing to its aesthetic appeal. Remarkably this church is still lit by gas – the only one I know in the county. The church has been much vandalised and now has lavatory glass in many of its windows but it is much loved and remains a true Kentish treasure.